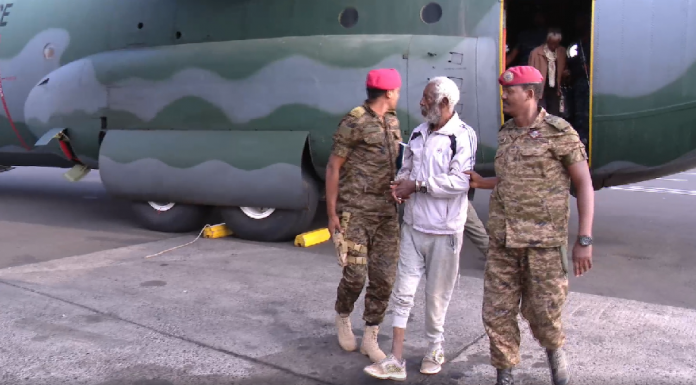 (ENA) The mastermind behind the distraction strategy of TPLF’s Junta Sebhat Nega, and eight other leaders of the captured group arrived in Addis Ababa on Saturday, according to the Ethiopian National Defense Force (ENDF).

It should be recalled that ENDF announced on Friday that the mastermind behind the strategy that has wreaked havoc over the past 27 years in Ethiopia and ultimately opened a bloody war by slaughtering the army, Sebhat Nega, and other leaders of the TPLF junta were captured.

According to ENDF, Sebhat was captured hidden in an extremely hard-to-reach ravine and members of the destructive force carried him into the deep and narrow gorge with sheer walls.

Along with the head of the junta were also arrested former members of the national defense force who betrayed the army and who had trained the junta fighters and took part in combat with them, it was said.

Those who kept the junta leadership had also been destroyed.

As a result, here are the top detained leaders of the TPLF who arrived in Addis Ababa today:

1. Sebhat Nega – Mastermind behind the destructive strategy and the leader of the junta.

2. Kidusan Nega Former President of the Council of State of the Tigray region

3. Tewodros Hagos – Former President of the Meles Leadership Academy and Chairman of the Board of EFFORT

4. Abadi Zemu – Former Ethiopian Ambassador to Sudan and member of the political wing of the TPLF junta

The head of the 24th Brigade, Colonel Amare Beata, for his part declared that the successful operation carried out to track down the TPLF junta demonstrates the fact that the inhabitants of Tigray do not support the TPLF junta.