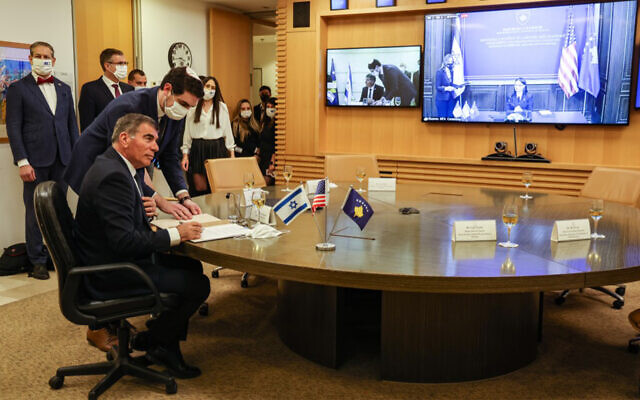 Muslim-majority Kosovo forges ties with Israel; will open an embassy in Jerusalem

Israel and Kosovo officially established diplomatic relations on Monday, with the Muslim-majority territory also recognizing Jerusalem as the capital of the Jewish state – putting it at odds with the rest of the Islamic world.

At a ceremony in Zoom in Jerusalem and Pristina, Foreign Minister Gabi Ashkenazi and his counterpart from the Republic of Kosovo, Meliza Haradinaj Stublla, signed a joint declaration establishing ties.

Travel restrictions to curb the spread of COVID-19, including the closure of Ben Gurion Airport, made an in-person ceremony impossible. It was the first time that Israel had virtually established relations with a country. Ashkenazi said he approved “Kosovo’s official request to open an embassy in Jerusalem.”

“The establishment of relations between Israel and Kosovo is an important and moving historical step which reflects the many changes that the region has experienced in recent months,” Ashkenazi said.

“Today, Kosovo officially joins the circle of countries that aspire to peace and stability and recognize Israel and Jerusalem as its capital.”

The foreign ministers signed two cooperation agreements – one to establish diplomatic relations and the other relating to the activities of the Israeli international development agency Mashav. They will email each other copies, each to be signed by their counterpart, according to the Foreign Ministry.

The ceremony was broadcast live on the Foreign Ministry’s Facebook page.

US State Department spokesman Ned Price congratulated the parties on this “historic day.”

“When our partners are united, the United States is stronger. Deeper international ties help to strengthen peace and stability in the Balkans and the Middle East, ”he said.

During the virtual event, Ashkenazi unveiled the sign that will be placed at the entrance to the Kosovo Embassy when it opens. Ashkenazi said he believed the embassy would be inaugurated before the Passover feast at the end of March.

Read more on The times Israel.