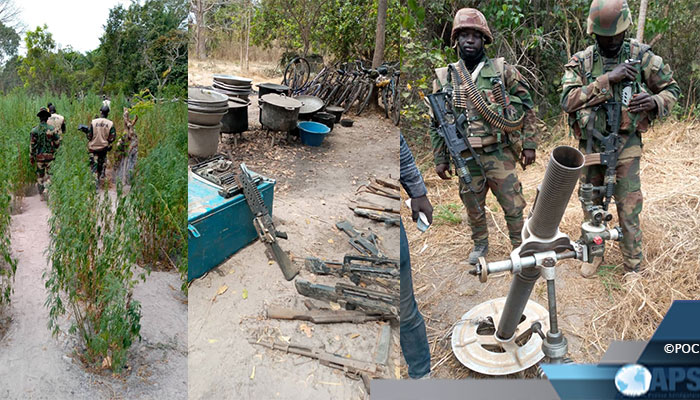 Casamance: the Senegalese national army announces the resumption of all the rebel bases on the southern front.

The last four historical bases of the rebels of the Mouvement des forces democratiques de Casamance (MFDC), located on the “southern front”, on the border with Guinea-Bissau, were completely taken over after more than ten days of intervention by the national army, reports the Senegalese news agency APS.

“The first historical bases of the MFDC were neutralized and taken over by the army,” Colonel Souleymane Kandé, commander of military zone number 5, said on Tuesday. These are the bases of Bamoune-Bilass, Boussoloum, Badiong and Sikoune. .

The Senegalese army officer was speaking on the sidelines of a visit to the locations where the operations took place, accompanied by journalists.

The command of military zone 5 launched a large-scale operation on January 25 to dislodge armed bands from the areas they occupy. The aim is, through these military operations, to create favorable conditions for the return of displaced populations to their villages abandoned for some thirty years.

On the national road number 6, which links the towns of Ziguinchor and Kolda via Balantacounda, near the village of Agnack Petit, a laterite track crosses the villages of Niabina, Mawa and Camaracounda.

It’s the start of an ordeal for any passenger who ventures a little deeper.

The military engineer detachment marked a path to open an access route through the buffer zone before the arrival at the bases of the MFDC fighters. Dust and tree branches impose minimum speeds on drivers and adventure seekers.

Samick and Niadhiou, two villages victims of recent abuses by armed gangs, are the only signs of a human presence in the area. In the middle of a luxuriant and dense forest, the remains of makeshift dwellings appear.

Sections of fences yellowed by time, worn mattresses, pieces of faded clothes, empty cans, a few stones, grenades, rows of ammunition, old briefcases, holes, bunkers form the backdrop for what ten days ago became the mythical rebel base of Badiong.

“Here, it is the historical base of the MFDC. It is one of the first bases. Combatant leaders like César Atoute Badiate and Salif Sadio passed through here before heading towards the northern front. It is a sanctuary. It was the command center. This is the site that housed all the armaments of the rebellion. This base is taken by the army, ” said Colonel Souleymane Kandé.

He called on the displaced populations to “return to the fold quickly because the security conditions” are now in place.

‘’ The process is irreversible. The state will soon proceed with the establishment of basic socio-economic structures such as schools, health posts, boreholes. Development NGOs and public projects like PUMA, PUDC and others will also intervene quickly, ’’ he added.

Colonel Souleymane Kandé, in the process, announced the creation of military posts along the border line with Guinea-Bissau thanks to the recent update of military agreements between the two countries.

He also praised the “great help” of the Bissau-Guinean army in the recent operations to secure the area.