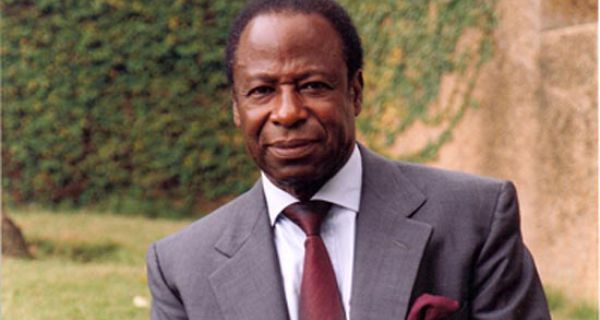 President Carlos Menem was elected President of Argentina from 1989 to 1999. He was nicknamed “The Turk” because of his Arab origins. His family was of Syrian origin and he was a Muslim and later became a Catholic.

He passed away at the age of 90 and is currently receiving the tributes of all the leaders of Latin America because he was a brilliant orator, an illustrious spokesperson for Latin America in international forums. He was one of the important creators of MERCOSUR (Southern Common Market) bringing together Brazil, Paraguay, Uruguay and Venezuela, defender of a new, more equitable economic order in international economic relations.

Due to the issue of the Malvinas or Falkland Islands, all Argentinian officials were interested in the Ivory Coast and its President Félix Houphouët-Boigny who, in their eyes, was a remarkable craftsman for decolonization in Africa.

A resolution was adopted in 1965 by the UN General Assembly entitled: “Declaration on the Granting of Independence to Colonial Countries”. The Inter-American Juridical Committee, an advisory body of the Organization of American States (OAS), had declared the existence of an “Irrefutable Right of Sovereignty” of Argentina over the Falklands.

The 5th conference of the Non-Aligned Movement held in August 1976 in Havana declared “Argentina the legitimate owner of the territory”. For Argentinian officials, the diplomatic struggle was to succeed in translating into concrete action all the resolutions and multiple declarations on this problem.

For Argentines, President Félix Houphouët-Boigny, with his stature as a great African leader, was a personality who could convince Madame Margaret Thatcher to find a diplomatic solution to this dispute which, unfortunately, will be resolved by what we have called , The Falklands War which began on April 2 and ended in a ceasefire on June 14, 1982. The results of this lightning war were 907 killed, including 649 Argentinian soldiers, 255 British soldiers and 5 islanders from the Island. Argentina’s defeat precipitated the fall of the military junta which then ruled the country. On the other hand, it reinforced Mrs Margaret Thatcher who was brilliantly re-elected in 1983.

It is in this context that I was received for the first time by the Head of the military junta HE Alejandro Agustin Lanusse who insisted that I tell President Félix Houphouët-Boigny that the Falklands problem was a problem of decolonization and that he could achieve in Latin America what he had already done in Africa. He had received me with all the honors at the Casa Rosada (Presidential Palace) in front of the Latin American cameras.

After the audience by his side, we drove to the Plaza de Mayo, central site of the capital Buenos-Aires where the Peronists, supporters of the war marched all day and night to recover the Falklands as well as hundreds of mothers dressed in white, members of the Association of Mothers whose children had disappeared, murdered during the “dirty war” by the military dictatorship.

At his request, I made an official visit to Buenos-Aires with a big dinner at Casa Rosada then a visit to Barrichelo, a mythical city in a hilly landscape in Switzerland and facing the Argentine Pampas.

In the Brazil-Argentina rivalry, two giants of Latin America, he had the ambition to make Côte d’Ivoire the starting point for the establishment of Argentina on the African continent, as thanks to the Côte d’Ivoire. d’Ivoire with Ambassador Elimane Diarra, Brazil had discovered Africa through Côte d’Ivoire.

This episode nevertheless allowed the development of relations between Argentina and the Ivory Coast. A large delegation of Argentinian businessmen visited the Ivory Coast and the Consortium Consulting International Group was to renovate the Plateau hospital under the leadership of Minister Jean Baptiste Mockey then Minister of Health. The Ivory Coast, on the other hand, had opened in Buenos-Aires the largest Embassy in Africa, which will be skilfully managed by General Ouassenan Koné.

Time will not soon erase the traces of Ivory Coast in Argentina, a footballing country, which knows Ivorian Drogba as one of the best footballers in the world just like Yaya Touré, Messi’s Barcelona teammate.