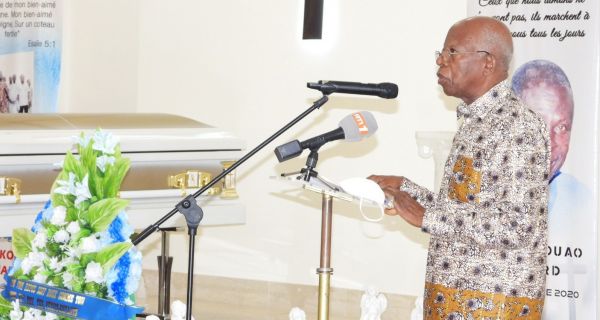 Prof Dedy Séri: “Papa Sassan Kouao, your role model deserves to be magnified today, tomorrow and the day after.”

President Laurent Gbagbo, from Brussels in Belgium, paid a vibrant tribute to his late friend Sansan Kouao, who died in Ghana, during the body lifting ceremony on Friday February 19, 2021 at Ivosep in Abidjan-Treichville at 10:30 am. Below, the full text of his speech read by Prof. Dedy Seri, vice-president of the FPI.

In this painful circumstance, allow me, on behalf of President Laurent Gbagbo, President of the FPI, as well as on behalf of the entire party leadership here represented by Mrs. Simone Ehivet-Gbagbo, Second Vice-President; Minister Assoa Adou Secretary General; Minister Hubert Oulaye, Chairman of the Control Committee; the Prefect Jean-Baptiste Gnaoré, President of the Permanent Political Council; allow me, I say, to speak not only to mark the presence of the FPI as a product of the illustrious disappeared, but also to bring the support of the said party to all those who have loved and practiced, from near or far, the Genius of Niablé.

On behalf of President Laurent Gbagbo, I would like to say infinitely yako to the high political and national administrative authorities; to the political, administrative and customary authorities of Indénié, Djuablin, Moronou, N’Zima, not to mention the Canton Chiefs of Yakassé-Feyassé, Niablé, Aniasué and Amélékia; Heads of Courses and Families; the political cadres of the Indénié including President Boa Amoakon Edjampa; very sincerely yako to the children, brothers and sisters, cousins ​​and cousins; to nephews and nieces; to the parents-in-law and to all the companions in the struggle of the Grand Planteur.

Yes, distinguished personalities, but also citizens and citizens from all social strata, this moment of extreme affliction is due to the very circumstances of the disappearance of the Former Founding Member of ANAPROCI: Edouard Sassan Kouao, who died in Ghana on the 30th. September 2020, after 9 years of forced exile!

Yes, in April 2011, he had not gone on vacation to Ghana, more specifically the Midwest, to Sefwi Wiawso! He went there unwillingly, during the attack on Niablé which resulted, as we know, in the destruction of his residence, after a systematic looting of his property, all his property, including the ‘Esika-mlan, that is to say the awulo’nky of SASSAN Kouao works with a thousand efforts and ingenuity in one erased day.

Since this event and despite all the appeals to him to decide to return to Côte d’Ivoire, Sassan Kouao has invariably replied that he cannot return to Niablé until Côte d’Ivoire has been pacified, that is to say reconciled. , and that once his younger brother and companion in the struggle, Laurent Gbagbo, indeed returned to the country.

Excellencies Ladies and Gentlemen, a figure of the size of Sassan Kouao, we mourn her and we must cry her with all her tears, her disappearance being a huge loss for her biological family of course, for her region of belonging, but also for the whole Nation. Sassan Kouao was indeed a multidimensional and trans-ethnic actor. This is why President Laurent Gbagbo and his comrades cry bitterly with the Sassan Kouao family and with all the other allied families.

But at the same time, President Gbagbo considers that we can just as reasonably dry our tears for three reasons linked to the exceptional career of the man from Niablé: a veritable data bank now available to young people.
First forced into exile at the age of 76, Edouard Sassan Kouao passed away in his 85th year in Ivory Coast where life expectancy hovers around 52-54 years. However, in Africa, in our Africa, when an old man joins his ancestors, we pay him a tribute worthy of his existential feat, rather than shedding tears. Because who wants to live long and healthy. This is why, moreover, beyond the traditional ceremony scheduled in Niablé for tomorrow Saturday, the FPI intends to organize in the coming months, a militant tribute to Espace Laurent Gbagbo in Niablé.

Then to die is nothing, since it is the best shared thing in the world. More important to humans is how to die. Indeed, to die standing or lying down, to die with dignity or with dishonor, by refusing or claiming submission, are by no means equivalent modalities. Life is traces, of course; but there are traces and traces. For he who dies or is ostracized or condemned to exile, for having said no to injustice and slavery, has more merit than his fellow citizen who disappears, sooner or later, in the bonds of subjection.

Finally, the third and last reason that prompts us to console ourselves lies in the socio-political depth of Edouard Sassan Kouao. What is it all about here?
It is because the deceased was an eminent political and economic actor who will survive in the consciousness of current and future generations, for what he has accomplished, in his double capacity as an illiterate peasant:

• a farmer insofar as he made a living from agriculture, in the first Cocoa Loop.
• an illiterate peasant as long as he did not master either reading or writing a foreign language which is therefore not his own.

In other words, illiteracy of the “scribal” type could in no way restrain or stifle the political conscience as well as the capacity for ethical discernment of a genuine holder of African culture, in particular the anyitiè. He was quite simply a man of progress in the anthropological sense of the term, in three respects: economic, socio-political and prospective or strategic.

Economically, Sassan Kouao distinguished himself by his great managerial qualities, winning in quick succession the famous National Progress Cup. This feat made him the illiterate peasant most adored by President Félix Houphouët-Boigny.
On the socio-political level, Edouard Sassan Kouao will survive eternally in all consciousnesses of today and tomorrow, insofar as he created and made available to Niable but also to the Ivory Coast, by ricochet, a Secondary Education Establishment, with around sixty lodgings for Teachers.

Above all, the legacy that Sassan Kouao leaves, and which goes far beyond the too narrow framework of the Ivory Coast, or even Africa, is the effective opening of the democratic game in our country. Indeed, the multiparty system decided in April 1990 had quickly appeared like a stillborn baby, no declared opponent being able to pay the 20 million deposit necessary to participate in the presidential election in October of the same year.

And against all odds, this enormous sum, therefore prohibitive, was paid by the illiterate peasant of Niablé. Is it now necessary to affirm that the impetus given to political games in our country stems from the courage, selflessness and generosity of Sassan Kouao?

From the perspective of a prospective view of things. It should be noted that the exile imposed on him did not condemn him to silence. He continued to insist that the conditions and means of democracy today and tomorrow go hand in hand with the return of his son and companion Laurent Gbagbo as well as with national reconciliation.

This is why President Laurent Gbagbo believes that we dry our tears with the family of a hero whose death is certainly a solvent, but also a tonic for the Nation.

Indeed, Sassan Kouao who has not read and could not have read Socrate, Montesquieu, Rousseau, or Tocqueville, will have allowed us to understand that by immersing ourselves in our culture, we can straighten our destiny at the beginning of XXI th century. In this perspective and by way of recognition, we make him the youngest Ivorian political Bagnon of all time,
after Bernard Dadié.

Because according to the American poet Samuel Ullman: “Youth is not a period of life, it is a state of mind, an effect of the will, a quality of the imagination, an emotional intensity, a victory of courage. on shyness (…)
You don’t get old for living a certain number of years;
We get old because we have deserted our ideal;

You will stay young as long as you are receptive.
Responsive to all that is beautiful, good and great.
Responsive to messages from nature, man and infinity (…) ”
For having exemplified this mystique of the flagship ideals of humanity, Papa Sassan Kouao, your role model deserves to be magnified today, tomorrow and the day after.
Farewell Master, co-founder of Ivorian democracy!