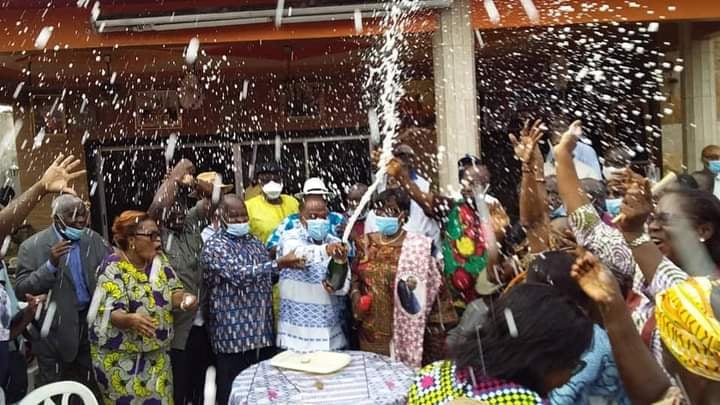 This Wednesday March 31, 2021, will remain a historic and unforgettable date for democrats around the world and citizens from here and elsewhere attached to the value and especially to Justice.

Indeed, the ICC Appeals Chamber confirms, by majority, the decision of Trial Chamber I of January 15, 2019 to acquit Laurent Gbagbo and Charles Blé Goudé of all charges of crimes against humanity. The acquittal is now final.

At the end of this historic decision, the activists and sympathizers and especially the members of the leadership of the Ivorian Popular Front were able to celebrate the acquittal decision as it should be this Wednesday, after the judgment of the judges of the Appeals Chamber of the ICC.

A joy that some activists and officials of Gbagbo’s party have decided to share together at the headquarters of the said Abidjan-Cocody.

As a reminder, the Appeals Chamber of the International Criminal Court (“ICC” or “Court”) delivered its judgment on the Prosecutor’s appeal against the decision of Trial Chamber I of January 15, 2019, which had acquitted , by a majority, Mr. Gbagbo and Mr. Blé Goudé of all the charges of crimes against humanity allegedly committed in Côte d’Ivoire in 2010 and 2011. The Appeals Chamber confirmed, by a majority, Judge Ibáñez and Judge Bossa dissenting, the decision of the Trial Chamber.

At today’s hearing, Judge Chile Eboe-Osuji, President of the Court of Appeal, read a summary of the judgment in open court in the presence of MM. Gbagbo and Blé Goudé. Due to COVID-19 restrictions, the judgment was delivered on a partially virtual basis, with the participation of either the seat of the Court or separate locations outside the Court.

In its judgment, the Appeals Chamber rejected, by a majority, the two grounds of appeal of the Prosecutor, namely that the decision of the Trial Chamber to acquit Mr. Gbagbo and Mr. Blé Goudé (i) breached statutory requirements and (ii) was taken without properly articulating and consistently applying a clearly defined standard of proof and its approach to assessing the sufficiency of evidence. The Appeals Chamber concluded, among other things, that while trial chambers should ideally deliver the verdict and reasons simultaneously, a delay between the delivery of a verdict and its reasons may not necessarily invalidate a trial as a whole. On the contrary, such a separation may be clearly justified in the particular circumstances of a case; most evident in this regard is when the liberty of an acquitted accused is at stake.