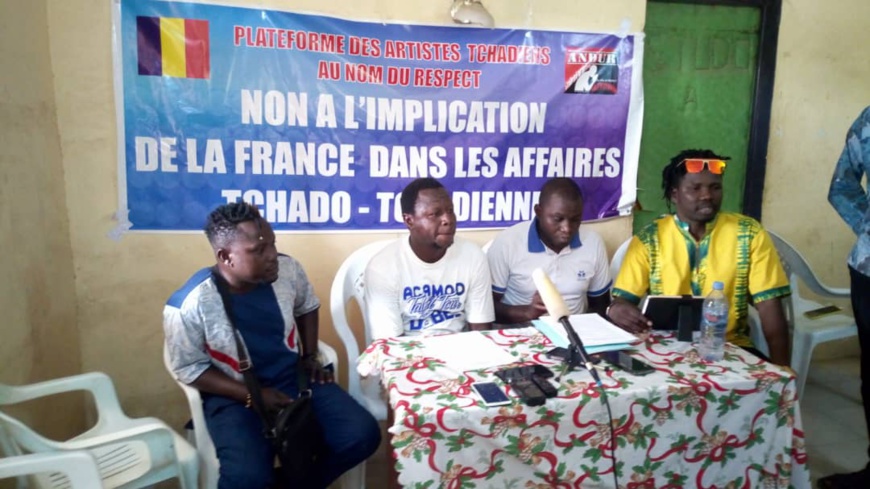 Artists of the platform “Au Nom du Respect” denounced Saturday, during a press briefing, the involvement of France in Chadian affairs. They spoke of “manipulation”, “outdated imperialist political maneuvers” and called on the people to “stand up and be ready for future actions”.

“Chad is a Republic enjoying a dignity acquired with dignity in 1960. Unfortunately, French neocolonianism uses the regimes in place to interfere as mistress in the leadership of our country. France still wants to be the gendarme, the controller of the Chadian Nation. In 61 years, Chad has acquired political maturity and deserves to take its destiny in hand, “says the platform.

“After decades of tribal wars and political management led by dictators, the wind of Western democracy should also blow in Chad,” according to artist N2A Teguil. He and the artist collective claim that “the Republic’s guestbook, our Constitution, seems to be trampled on by partners and the executive.”

They believe that “for more than 30 years France has supported and supported a regime that it knew how to manipulate for its personal interests. At a time when Chad is in mourning by the disappearance of its President Idriss Deby Itno, instead of ‘helping Chad as it claims to pass through a peaceful transition, France is blowing hot and cold while clearly showing its intention to go to war.

The artists of the platform “Au Nom du Respect” demand the non-involvement of French politics in the management of Chadian affairs and condemn “with energy the mechanism of France-Africa behind which France is hiding to orchestrate barbarities on our territory “.

“Chadians are mature enough to organize their development among themselves,” they insist.