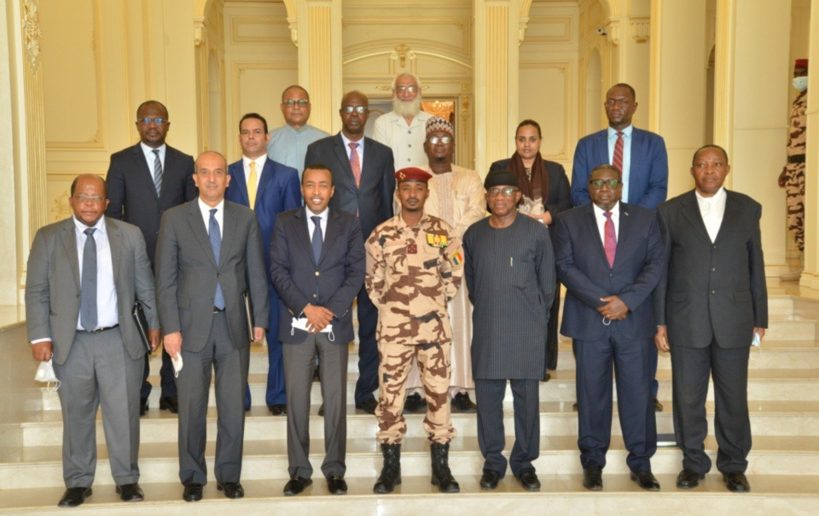 The delegation is made up of 16 members. She spoke for nearly two hours with the chairmen of the CMT on the transition process.

According to the Ambassador of the Republic of Djibouti to Ethiopia and Permanent Representative to the African Union, Mohamed Idriss Farah, the stability of Chad is of primary concern to the Pan-African institution, hence their presence in N’Djamena.

Ambassador Bankolé Adéoy urges Chadians to work for a peaceful transition in peace and quiet. “We are going to meet and listen to the various political actors and those of civil society before submitting our report to the parent company,” said Bankolé Adéoye.

The African Union delegation’s stay in Chad will last one week.

As a reminder, the African Union Commission, with the participation of five (5)) members of the Peace and Security Council (PSC) of the African Union (AU), as well as the Democratic Republic of the Congo in its capacity President of the AU, arrived on April 29, 2021 in N’Djamena, Chad, for a seven-day fact-finding mission, from April 29 to May 6, 2021.

The Mission is headed by the AU Commissioner for Political Affairs, Peace and Security, HE Ambassador Bankole Adeoye, as well as the President of the PSC for the month of April 2021, HE Ambassador M. Idriss Farah from the Republic of Djibouti.

The current fact-finding mission is being held in accordance with the PSC Communiqué [PSC / BR / COMM.2 (CMXCIII)], adopted at its 993rd meeting held on April 22, 2021, on the situation in Chad.

The PSC had authorized the AU Commission to set up a fact-finding mission, with the participation of members of the PSC, to visit Chad for the purpose of discussing with the Chadian authorities all questions relating to the situation in the country. , in particular to support the investigation into the murder of the late President Idriss Deby Itno, and to learn the facts with the aim of restoring constitutional order.

The fact-finding mission will seek to obtain first-hand information from the Chadian authorities and stakeholders on the evolution of the political and security situation, and will examine strategies aimed at facilitating a rapid return to constitutional order and justice. democratic governance, while preserving the security and territorial integrity of Chad.

In addition, the fact-finding mission should reaffirm the AU’s solidarity with the government and people of Chad, as well as its unwavering commitment to support the transition process.