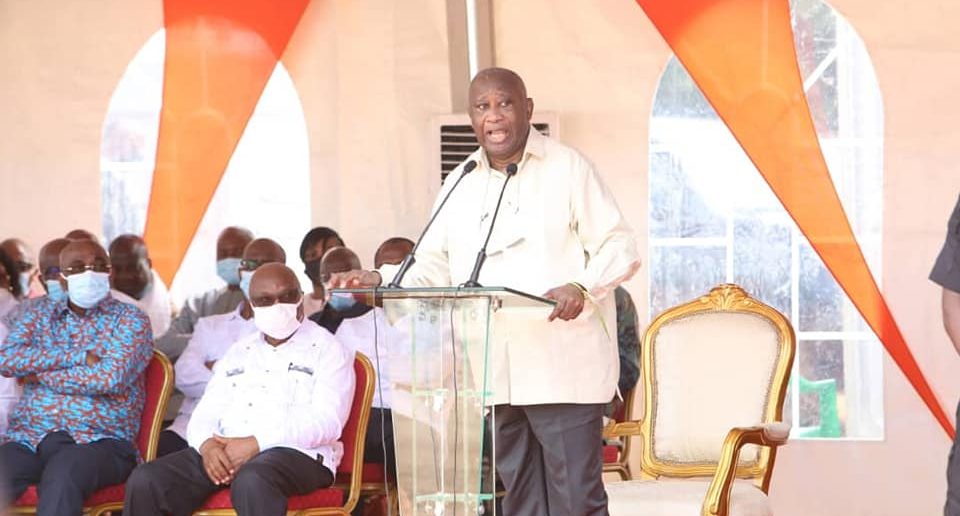 Laurent Gbagbo to the Wê populations: “I call on everyone to take their cool and sit down and think.”

President Laurent Gbagbo received on Saturday August 28, 2021, the Wê populations of the regions of Guemon and Cavally in his native village, Mama, in the sub-prefecture of Ouaragahio. Below is the address, in Mama, of President Laurent Gbagbo to the Wê and Cavally populations.
Dear friends, I would first like to greet the village chiefs who are there. We are in Mama and Mama is a small village. We are part of a set of 7 villages and whenever there is a circumstance we all come together. We are the Blouga. I would like to greet all the chiefs of these villages who are gathered and on whom I always impose sacrifices because when I am there, there are people who come. Ayahooo, Ayahooo. I would also like to greet the heads of land.
But today is the long awaited day. It is the visit of the Wê. I salute you ! I have one at home, it’s Viviane. I have one who is always at home, it’s my son’s wife so I have Wê at home. But all of you, Guemon and Cavally, I am happy to see you but before I speak, considering what you have suffered, I ask that we all rise to observe a minute of silence, in memory of all those who have suffered. are dead. (1 minute observed) Thank you!
Today, the main speech was given on behalf of the Wê by Hubert Oulaye. I came to listen to you, But I will come to Wê country! (Applause) I will come to Wê country to see you.
You know, this country Wê is a country of martyrdom. Already in 2005, when I was in business, I was in Angola, I was leaving for Rwanda, when I was told that massacres had taken place in Duékoué. I came back, I was obliged to take exceptional measures: I appointed a military administration in Duékoué, Guiglo, Taï, Bloléquin so that the force is opposed to the force. I put at the disposal of the military administrators, the elements of the Toroguhé gendarmerie and I appointed above them all a military administrator, who was moreover a Wê, son of the country. It had time to calm things down. It was in imitation of this militarized administration that I created, in Abidjan, the CECOS that I had entrusted to Guiai BI Poin because he was Director of the Gendarmerie School and therefore he had men, troops, to deal with delinquency in Abidjan.
After that, there were the events of 2010-2011 where these people again paid a great price. Dead, dead, dead. What we need to look for is the end of this cycle of political deaths. We must be able to play politics without there being any deaths. Yet it is easy to understand but many do not understand it. No matter what the cost does not exist in politics. And it is not a question of political parties. We are here today, there are friends, comrades of the PDCI-RDA with us, and then in this vast assembly, I am sure there are at all. So it’s not a question of political parties, it’s a question of abandoning the idea of ​​whatever the cost. We must abandon the idea of ​​cost whatever the cost. If I was not elected, I was not elected! If I was elected, I was elected! But if we elected the other, I must know that we elected the other!
Oulaye Hubert, I asked you to study everything that happened in the country we, keep going to the end! Go to the end! I ask, it’s not because the wê are my parents, but it’s because it’s Ivory Coast and everything that happens in Ivory Coast, we have to know why it happened. In the book that I published in 1983, I explained why there had been the Sanwi problem, I explained why there had been the Guébié problem, I explained why in Séguéla, there was had the problem of Sekou Sanogo, because when you do not explain why there are deaths somewhere, you cannot stop the cycle of violence that leads to deaths. So you have to think, you have to study, always study and still study.
We people, Yako! Yako my parents! Yako my fathers! Yako my sisters! I salute you ! But the solutions are still ahead, we have to seek solutions and find them. We have to look for them and find them. It is not enough to say, Yes we wê we were killed, no, no no no. A human being who is killed, we have to explain why we killed him. We have to explain why we killed him, why he died. So I salute you for your bravery.
I greet you quite simply because you came to greet me but you have played your role as parents, my role as a politician is to look for what makes us act, what makes men do serious acts . Why ? For a job? I’ll get killed! Why ? This why must be explained. For the moment, we only have our tears to cry, our eyes to cry, but we are not going to spend our whole life crying.

At some point, it has to stop.
I call on everyone to take their cool and sit down and think. For a moment, I said to myself, the Wê have a lot of forests so people will attack them to take their forests. To take the coffee trees, the cocoa trees, so people attack them. Maybe that’s what explains it. But if that’s it, it’s serious! If that’s it, it’s serious, we still have to think about it. And I keep thinking.

Dear parents, Assêh! I’m doing a little bit (laughs). I can manage myself. I greet you because you have come from afar to greet me. And I am happy with your visit! I am coming ! I am coming ! We will visit all the departments, we will mainly discuss, discuss, listen. I will listen to you.
There is a priest who is from Duékoué, I don’t know if anyone remembers him, Doué Bertin. He is a very brave gentleman. I was in seminary with him. He was coming back from the Algerian war and when he arrived in Côte d’Ivoire, he had only one idea, he wanted to be a priest. He was old and he was asked if he wanted to be a priest, he said yes. And he resumed his studies from the Elementary Course to the Major Seminary. And I lost sight of him since I had left the seminary. One day, I was on a political tour and then I find him with his cassock. We were so happy. If you leave, tell him that I greet him and that I have the best memories of him, because each time, in prison in The Hague or in Belgium, I saw the images of the killings of Duékoué, I saw him, he was always there trying to clear the dead, to locate the wells where people had thrown the bodies. He did a lot to ensure that the dead were buried. Bertin, tell him that I greet him and that I have very good memories of him. I saw him at work, walking from mass graves to mass graves, I saw him rescue people.
And then, we people, you have great wealth, the forest. And when I went in 2005, I was stunned to see the number of allochthones and foreigners who were in these forests. Because we had taken them out to regroup them at the Prefecture, at the Town Hall. I was surprised. Hubert, we must continue to dig.
Dear brothers, dear sisters, the road is long, I am happy to see you. But I also have to take into account that the road is long. You have a river to cross, fortunately there are bridges now (laughs). I must free you so that you can leave as soon as possible to arrive in your villages as soon as possible.
I greet all those who did not come, who would have liked to come but who did not have the means. And then I also say hello to all those who were told not to come because it was going to be too crowded (laughs).
And you came to see if it was indeed me who came, it was indeed I who came (Applause). You saw me, I saw you, but you gave me a lot of gifts. It is never said that there are too many gifts because the goods offered to you are always the goods of GOD. So we never say that there are too many donations, but you have given me a lot of donations. Thank you ! Ya meat, rice, even the sauce you gave me. The rams, all that! My Chefs, kiffy, we’re going to eat eh (laughs), all of that we’re going to eat (laughs). They brought us food, thank you very much, thank you very much!
I would like to greet all the allies, especially those of the PDCI who are with us. Say my thanks to President BÉDIÉ. There are times when we are there and then in our regions, we say him there he is FPI, he there he is PDCI eh, he is too brave but our parents are all the same, our customs are the same. We can even sit down, you can tell him, come on you will accompany me to the bandji, he will believe that you want to poison him, he will believe that you are going to poison him or it is around the bandji that you can discuss disputes so thank you for coming. I also thank all mine, all my brothers, all my comrades who came, all the betes who came from the 7 villages of Blouga and even elsewhere who came to help me welcome my foreigners. I would like to thank them too.
Ayahoo, Ayahoo and you, GOD bless you! The Wê, GOD bless you! May GOD keep you alive! May GOD accompany you back to your villages peacefully and may everyone sleep at home this evening peacefully! Thank you !